SONS OF THE AMERICAN LEGION

About the National Emergency Fund 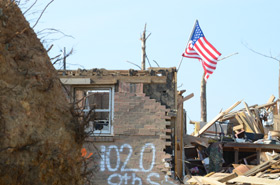 The Preamble to The American Legion Constitution sums up the theme of the National Endowment Fund, "... devotion to mutual helpfulness." This phrase is more than just mere words on paper; it's our pledge of support to Legionnaires and their family members. Since the early 1920s, The American Legion has been actively involved in meeting the needs of both the community and individual Legion Family members in the wake of disasters such as hurricanes, tornadoes, earthquakes and wildfires.

NEF helps those affected by well-known disasters such as Hurricane Katrina and Superstorm Sandy and lesser-publicized tragedies such as flooding in South Dakota or Illinois, or wildfires in the southwest.

2. Applicant must have been displaced from their primary residence due to a declared natural disaster and provide proof of out-of-pocket expenses.

4. Does not cover insurance compensation or monetary losses from a business, structures on your property (barns, tool sheds, etc.,) equipment or vehicles.

5. Membership must be active at time of disaster and the time of application.

1. Application must be received within 90 days of disaster.

2. Disaster must be a "declared" natural disaster for Legion Family members.

3. Supporting data (photos, receipts, repair estimates, etc.) should be included if at all possible or statements (testimony) from post/district/department officers attesting to damages.

4. Only one grant per household.

5. Post grants must derive from a declared natural disaster and substantiating documentation must provide that The American Legion post will cease to perform the duties and activities in the community due to losses sustained.